Back last summer I said I would only post if there is something interesting to say.  Apparently, there has not been anything interesting in the last eight weeks—or else, maybe I’ve just been too busy?

So here is a quick summary:

We have both received the Moderna vaccine.  We had a rough day after the second dose, but are fine now and edging back into normalcy.  As you shall see . . .*

I’ve been weaving a rug now for a number of weeks.  It is a new experience for me and I’ve been taking my time with it.  Trying to enjoy the process.

Roger has been way busy with building a kiln to burn wood into biochar with the heat produced used to help heat the house.

It snowed in February and that snow stuck around for a week.  I think it pushed Spring back a bit here at Thornbush but we are way in it now.

Our grandson Corbin got to come here for a sleepover on his 9th birthday.  We rode the ferries back and forth to pick him up and deliver him. *First time in over a year.

People have been asking about the cottage.*  So here is a little of what we’ve been doing all winter:

Look at Pinterest a lot to see tile ideas for when we get done with the outside.  The shower parts are there but not installed.  The tile guy is coming over this week to check it out. We have hot water and a sink and a toilet. Mostly but not completely insulated.

Ventured on to the mainland yesterday to pick up a yellow plastic kayak from a friend.  Then got to visit with kids and grandkids and take the twins out to a real restaurant for their fifteenth birthday.*

*edging back into normalcy

It started raining in late October and made up for lost time in November.  The month ended with a cold streak–heavy frost one month later than average that stayed around for over a week.  In between squalls the first weekend of the month, we attended an art opening which included our friend Peggy Sue’s recent work.  I neglected to take pictures of her work but many of you have received birthday cards by her from me .  Also at the show was a young sculptor by the name of Maria Michaelson.

The following weekend my friend Monique came up from Seattle to go to a basketry class with me by Peena Tinay.  I’ve already posted on Facebook but for you non-FBers here is another picture. 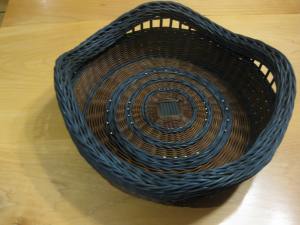 And remember this?  It was a messy warp last time I mentioned it (in September).  Ta-Daaa!  a double-weave table runner in “Windows” Pattern.  There’s a little more warp left on the loom so I hope to make a follow-up piece.

Soon enough, the real Thanksgiving (see last month’s Thanksween) came around and we enjoyed a nice meal with friends and family.  But the real celebration came that weekend when Roger celebrated his 60th birthday with a bowling party.  Brother Guy sent a bowling shirt of their dad’s which I’m sure made Roger bowl that much better.

And so ended the month of November with much to be thankful for.

The Japanese Lanterns are out even though it is not technically Autumn for three more days.
The birds have eaten every single grape. And we are busily harvesting and processing apples, pears, plums, hazelnuts. 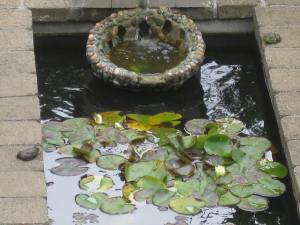 It’s raining. Finally. The waxwings are all over our crabapple. A barn owl attacked the chickens in the upper yard. Roger surprised it and stole back the still warm chicken. We ate it last week. There are two bullfrogs in the courtyard fountain. Where will they go once the weather gets cold?

Our friends Lindsay and Karen came up to visit over Labor Day. Karen got to stay in the newly remodeled cottage sans the new windows that have yet to be delivered.

And that brings up the biggest topic–Projects. As if harvesting was not enough–I’ve been painting the soon to be finished cottage.

painting the floor of the cottage–before

And I felt it was time to actually do the mosaic tile table top for which I had been saving broken pottery for a number of years. It uses tiles left over from the upstairs bathroom–so that’s fifteen years ago, anyway 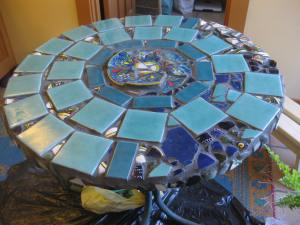 Oh, I also made a cute little apron out of old tablecloths for Rosalie’s birthday.

And Finally,
Oh, how the heddles do deceive when first you thread the loom to weave. 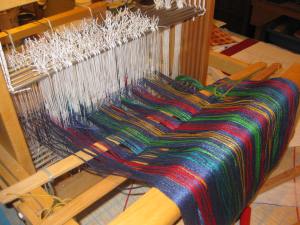 I hope the new heddles arrive soon and I will be way into my weaving project by my next post. Fall will be fully underway by then as well.

There’s never a dull moment here at Thornbush.  Even though the ground has been frozen for a week or more, Roger has been able to “play” outside–chainsaw in hand.  Just today he took off a major limb from the crabapple out front.  It is fruit tree pruning time.   And Suzie has a brand new friend to play with now that Uncle Eric has adopted a yellow lab named Barley.

I’ve been working on several projects.  Last month I held the first All Island Meeting of the SJC Textile Guild since I became President.  It was on Shaw and we had a nice Show and Tell as well as our now annual Stash giveaway.  Here I am, showing off the pendant I made last Fall at a Micro-macramé class and the earring I just finished to match.

I did harvest my basket willow for next year’s projects. And I’m trying to finish my sheep for the Fair this year. (It was meant to be in last year’s fair, but , oh well).  Not done yet. 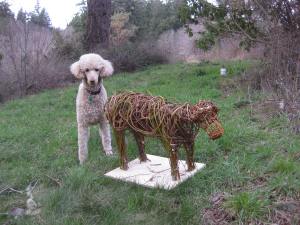 We had a great impromptu night of creativity at January’s textile guild mtg at the library.  Inspired by Francie Hanson and supplied by her as well.  We all dove into our inner child. 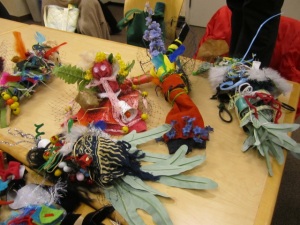 I was gifted mah jong lessons from a Soroptimist friend at the holiday party.  I doubt I will have the time to play it regularly as many do here on the island.  And it looks as though one does need to play regularly if one has any chance of improving one’s skills.  It does look like a fun game and I like the tiles.

These are the most creative things I’ve been doing, but there have been more mundane projects as well:   A couple days of sorting through old boxes, IRS returns, organizing my craftroom,  updating our Forest Stewardship Plan.

Not to mention watching the Superbowl and Sherlock on tv.  Trying to stream the Olympics and the Westminster Dog Show on my computer.  And I’m reading Ken Kesey’s “Sometimes A Great Notion”, which is not an easy read.  Hikes, documentaries, luncheon meetings, overnight guests, potlucks rounded out the month.  I really don’t have time to take up mah jong, too.