Some of you may be wondering what is going on with the cottage remodel these days.  Unfortunately, since the travel ban, our guests have not arrived and so the impetus to get things done has stalled.  There have been a lot of fiddly things.  Not much to look at.  For instance, the vent for the toilet was placed.  Roger’s time on the roof sawing that hole scared me enough to ask him if we could rent some scaffolding for when he saws the skylight openings.  No way, man.  We can build our own scaffolding.  Which is what we did last Sunday.  We also have hot water now.  In this picture you can see the water heater sitting snuggly under the addition.  No more wildly fluctuating hot and cold showers my friends!

The Willow falling down over the henhouse did show up on Facebook.  But since this is a record of events for the year I will include it in this blog as well.  A little bit of excitement on a windy afternoon in late April.

May is a month of many birthdays in our family.  Almost as many as April.  On May 2nd, my mom would have turned 100.  Here she is in her HS Senior Photo.  My brother-in-law Tom turned 60.  And I had a birthday as well.  Thanks to all of you who sent cards and greetings.  A weird time to celebrate—I even had a Zoom bday party with good friends.

Maggie Mae had a May birthday as well.  She turned one on the 21st.  I don’t have any fabulous pictures of her—she moves too much.  And my dog grooming skills are not quite there yet.  I’ve given her three haircuts since the quarantine began but she still looks quite shaggy.

The Farmers Market is going great guns for the Grange Booth.  Roger has been selling biochar, trees, berries, eggs, and even some of my parsley.  But they are playing by the rules and practicing social distancing.

As in the previous two months, a great deal of our coping comes with being outside, digging in the garden, mowing the paths, and appreciating the ever-changing landscape.

The fawn lilies were out at the beginning of the month, that gave way to service berries, then hawthorns, and the dogwood are at their peak. Rhodies, roses, ceanothus, lilacs, iris.  The fruit trees in the orchard really put on a show this year.  More than usual to make us all feel a little better?  One wonders.

How do I begin?  Things are so different from a month ago.  The outside world news is changing so fast and yet the month seems to have dragged on forever as we watch for any sign of Spring to brighten our days.

In some ways life has gone on pretty much as normal.  Plenty of things to do around here and we try not to go in to town unless we have to.  Now there’s nothing much left to go in to town for except groceries and we’re pretty set right now.  Plus, we’ve got the chicken eggs and plenty of kale.  We’ve been eating well.

Roger is selling biochar and bareroot fruit trees at the end of our driveway.  Agriculture is an essential business.  People may be wanting to start their Victory Gardens now.  He also has plenty of time to start the garden and work on the never-ending cottage bathroom remodel because the Grange is closed for business for awhile.  I feel bad for the weddings that had to cancel.

Spring is taking its own sweet time!  Lots of blossoms on cherry, plum, and apricot.  But too cold for the bees.  Temperatures have been hovering around 40’s as highs and 30’s as lows.  This hasn’t stopped me from taking some great walks with Maggie around the island—American Camp and Mt. Grant.  But it sure could be warmer!

Picking nettles for tea, crocheting a baby blanket, watching a lot of Netflix—these are a few of my favorite things. Roger even has me playing my accordion with his uke once a week.

Today there are 3 cases in the county, two on Orcas and 1 on Lopez.  Non-essential ferry travel has been suggested and construction projects have been halted.  Browne’s is closing their lumber yard.  It will be interesting to see where we are in a month.

Pretty Boring title, eh?  But apt for this month of February.  Only two major things happened this month.  A record breaking flood of our little stream along with lots of others in all of Western Washington.  And Maggie was spayed.  Which was traumatic for all of us.

As I reported last month, we got a lot of rain in January.  And the 31st put us over.  The stream flooded cutting new channels and spreading into a huge area.  The culvert onto Zylstra property buckled.  Don’t know how that will affect us in the long run.

Maggie did not adapt well to the “cone of shame”.  We stayed up with her for two nights and took turns watching over her for several days.  Finally, we borrowed a onesie for her to wear and she was much better off.  But we still had to leash walk her for another week.  All is well now.

“The rapidly unfolding climate emergency necessitates greater local action by our community and the county. We know that our electrical power, food and material deliveries and summer tourism dominated economy is fragile with regard to serious disruptions that lie ahead of us.
The global movement called Transition gives us both a large network of other communities around the world who seek greater self-determination and a grass-roots, participatory, informal way to take purposeful action locally on the issues of greatest importance today and in the uncertain future”

The rest of the month was mostly reading, watching Netflix, and crocheting a new hat while watching Maggie convalesce.  Taking walks in between storms and taking quite a few naps. Sounds like a pretty good retirement.

Also of note, Roger and I are in two different book clubs and we each hosted our respective clubs this month.  His is ABC– Apocalypse Book Club.  So you can see that this uncertain future is weighing heavily on us.  No surprise, we’ve spent a lot of time listening to Presidential debates and caucus results.

Spring is just one month away.  The signs are everywhere.  Also, the sawmill is up and running, boards have been made and placed in the cottage bathroom project.  So–progress!

December 21st Solstice  we had a party at the Grange and invited the whole community.  And they pretty much came.  Everyone wants to celebrate the return of the sun.  I am writing this post five weeks later.  Still waiting.

Christmas Day was very quiet for us.  We celebrated with children and grandchildren the following weekend in Everett.

A day and a half later, the gang came up to celebrate the New Year.  They brought the party with them with fireworks, masks, scavenger hunt prizes and plenty of food.  Fun was had by all.  Then they left and it was very, very quiet around here for a few days.

So I had another dinner party.  This one was Sicilian themed.  Alice and I made arancini and I served a full Italian: antipasta, pasta, fish, spumoni.  Our guests joined Roger with their instruments and made sweet music together.  Good way to get through the winter doldrums.

All through this my neighbor and friend with a young Aussie have come over once or twice a week to play with me and my puppy.  Suki and Maggie are BFFs.  At least I hope so.

And then this happened: 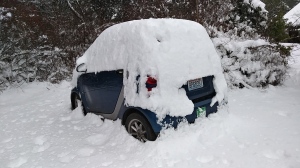 Dogs love snow.  At least most dogs I know.  This snow was more than we normally get, but only a few limbs came down and the snow left very quickly.

In the middle of this, Audrey turned 10 and we took her to a very stormy beach on Camano Island to celebrate.  The ferry was an hour late taking us home due to high winds.

That’s what is happening here at Thornbush this month.  If you would like a more meaty report you should try my brother Joe’s:    https://barrecavineyards.com

Roger and I have switched from NPR every morning to listening to music or podcasts like Hidden Brain.  And in the evening we stream tv shows from the 90’s and Ken Burn’s Country Music series.  We’re looking for the calm.

Just had a look back at all my posts from 2019 and I must say, I had a spectacular year.  Wow.  I really don’t know if I can reduce it all to one post.  You may have to go back and read the whole year like I just did.  But I will call out a few highlights.

Lots of friends (and family) visited this year.  Some for a week, some just for the day.

February  -most fun road trip taken with my friend Laura to see my friend Tori in Arizona.  Including meeting wonderful people in El Paso, travelling with them to Santa Fe, and riding a railroad to the Grand Canyon.  Excellent Adventure!

April thru the Present– Work starts on the cottage bathroom addition and continues throughout the year.

May – Textile Guild exhibit at the NW Quilt and Fiber Art Museum in LaConner has two of my pieces, my backpack and a random weave canine I call “Sentry Dog”

June –Supernatural road trip to Prince George, British Columbia with my friend Nancy to a weaving conference.  Including visit to Whistler and First Nation Cultural Center there.  And trip to historic Barkerville with re-enactor friend Judy.  And first trip to the magnificent Sunshine Coast.

July – Picked up Poodle Pup and named her Maggie Mae.  Puppy and training take over my life.

September – third fabulous road trip of the year, this one with my friend Francie to Olympic Peninsula.  New to her and nostalgic to me visits to Cape Flattery, Lake Quinalt, Hoh Rain Forest, Ruby Beach, and on and on and on.

November and December – Reality hits with long illness and quick decline of my father Joe Sr., the Barreca Patriarch who lived a rich full life to the age of 97.  Celebration of Life family gatherings.

December – Trump get impeached.  And busy, busy with family, friends, holiday, and dog

The family of Joseph A. Barreca wish to announce his passing on November 15, 2019.

Joseph A. Barreca was born on June 10, 1922 in a little town west of St Louis, Missouri called Pattonville.  He was the first of seven children born to Italian immigrant parents, Tony Barreca and Rose Venturella.  As a child he helped his father in his truck farming business and sold fruit and vegetables door to door.  During World War II, Staff Sergeant Joe Barreca was stationed in India, China, and the Marshall Islands and worked on radar equipment.

After he was discharged he married Evelyn Jane Jones, a Coast Guard SPAR and Oregon native he met in Florida.  They briefly attended Univ. of Missouri in Columbus but soon moved to Seattle, Washington to attend college under the G.I. Bill.  Joseph earned his Law Degree at U.W. and started his law practice on Saint Joseph’s Day, March 19, 1951.  As an attorney, he specialized in bankruptcy law and was instrumental in the organization of the National Association of Chapter 13 Trustees.  He served as a trustee in bankruptcy from 1954 until 1975.  His private law practice continued for another twenty years.

Joseph and Evelyn raised seven children, eventually settling in Seahurst, Washington and attended St Francis of Assisi parish. They moved to Daystar Retirement Community in West Seattle and to Holy Family parish, and sold their home in 2003.  Evelyn preceded Joseph in death in 2009 after 63 years of marriage.

Memories can be shared the on Forest Lawn Funeral Home website https://www.dignitymemorial.com/obituaries/seattle-wa/joseph-barreca-8933211